Quang. The list of previous interviews is available here→

In this issue, we will present questions in Q&A form that were not asked during the original interviews in this Bonus Complitation」！

Ochoko In this issue, I would like to ask some questions in the Q&A form that were not asked during the previous interview articles. Thank you so much for joining me again today.

Ochoko There's a sense of Phoenotopia's charm in that there is more than one way to solve puzzles and the various equipment used. Do you have a personal favorite puzzle, item, etc., that you like?

Quang Being able to solve puzzles in multiple ways was definitely something I wanted to encourage. Games are just more fun when there are multiple solutions. That's something I'm thinking about more and more in my future games as well.

As for my favorite puzzle, that would be the 「Megalith」, which is more of a puzzle/enemy hybrid. There are numerous ways to "solve" a Megalith. With the right tools you can disable it, or you can sneak by it, or trip it up with objects or enemies. It was dangerous, but it also had a very predictable pattern, making it very fair. Seeing speedrunners play with it made me like the Megalith even more. 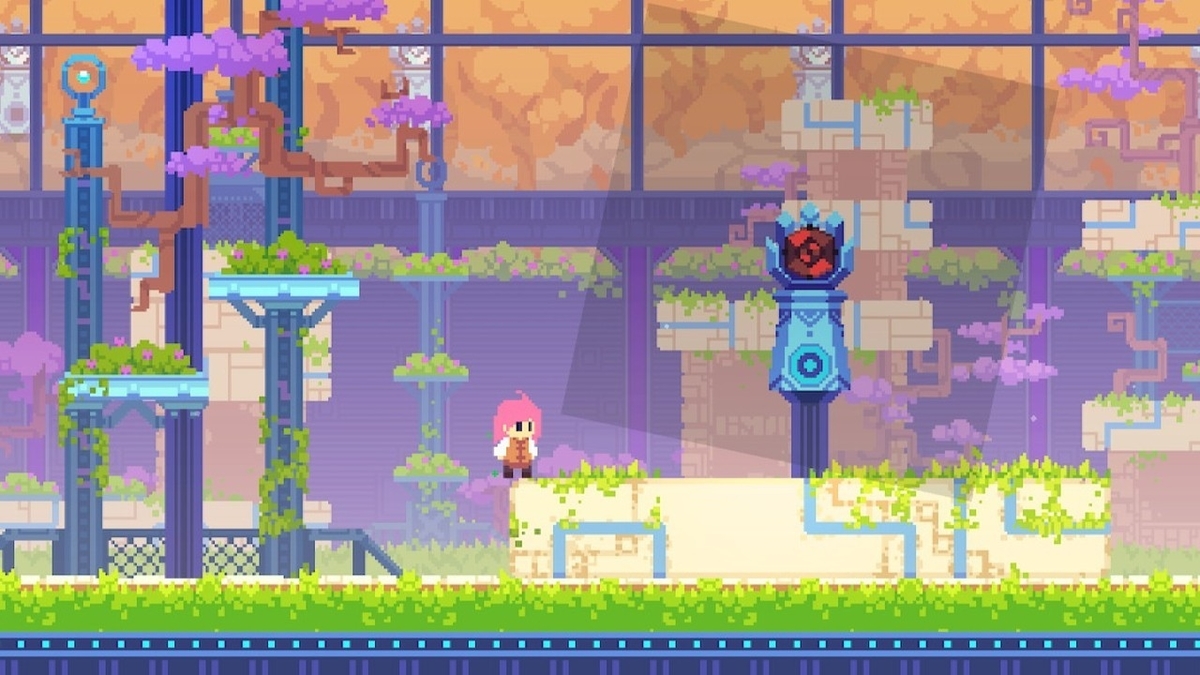 OchokocDo you have origin stories for the names of any main characters, sub-characters, etc.? If so, can you please share those stories with me?

Quang  Ah yes, there is generally a reason behind the names. I have a "baby name book" on my desk and I'll flip through it whenever I have to name an NPC, haha. I look for names that sound cool and have a meaning related to them somehow. For example, "Adar" is a bombmaker and his name means "fire".

Later, I discovered that "Gale" is actually a boy's named, so I fixed it to be "Gail". So the association with wind was lost.

There's generally a story behind each named NPC. However, some names were chosen really quickly and don't really have much meaning behind them other than for a joke. For example, the Atai mayor's name is just called "Mayor".

Ochoko Do you have a favorite boss? Please tell me about them.

Her fight is designed like a pokemon fight, where she'll be shouting out attacks, and the Sand Drake obeys. I also thought the mechanism used to trick the Sand Drake into eating a bomb was pretty clever, so I was happy with how it turned out. You can also attack her directly for some money.

Is there any way to talk to the kids playing in the sand under the staircase in the city of Daea?

Quang There is not. I wanted to fill the space more to create the mood of a bustling town, so that's how those kids ended up in an unreachable area.

Come to think of it, I got a few inquiries about the unreachable door in the previous flash game. So I learned my lesson and made sure there were no unreachable doors this time around. But now I have unreachable NPCs, so I've messed up again, haha. 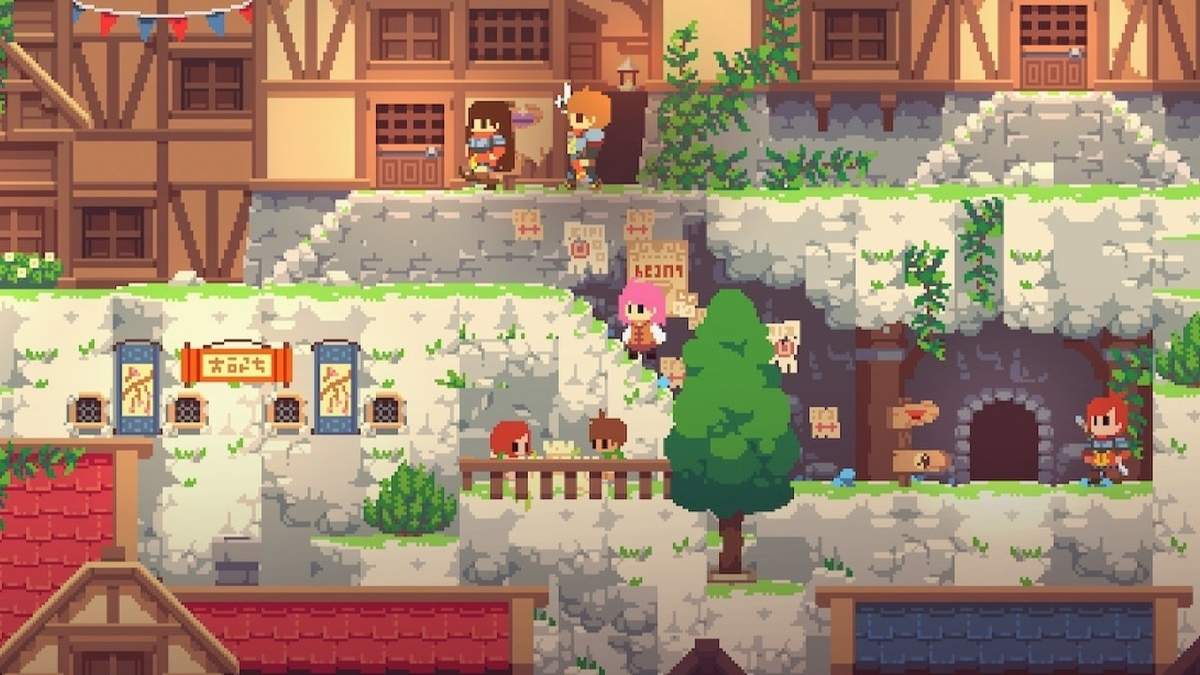 Ochoko  The item description for Doggoro reads, “You might already like it more than your other golem companion!” (haha). So how does Gail feel about Bart?

Quang Gail has a good and favorable impression of Bart. She just likes the dog more sometimes, because it's cuter, haha. The description does say "might".

Ochoko  Within the story, family relationships are set up even for mob characters (characters without a personality/character trait), and the portrayal of the mother-daughter relationship seems exceptionally prominent. Was this setup intentional?

Quang Oh, that's interesting! I try to go for an even mix, but I don't keep meticulous records to ensure they're exactly equal. So if there's an imbalance, it may be a blindspot in my subconscious that I'm not aware of.

Ochoko  Lisa owes the mayor of Atai a large debt, so I wanted to know if there is a reason why she owes such a huge debt?

Quang It's a little hinted at, but she takes on a large debt to save Garnet from a bad situation. It's also why Garnet is so grateful to Lisa.

Ochoko Rutea writes about someone she is interested in, in her diary. Who is that person?

Quang That would be Gail's brother, Kitt.

Ochoko  Is Phoentopia set in the future of the real world? (I want to know…how does the world map look? And where in the world is it set in?)

Quang Phoenotopia is not set in the real world, but a fantasy one that has some similarities to our own.

Ochoko  Cats are often seen, but hardly any dogs are seen. Why is that? (And I noticed that there aren’t any cows either…)

Quang The cows and sheep were combined into one pooki species - hence why there aren't any cows. As for the ratio of cats and dogs... hmmm... I think it just came about organically as we were developing. I think we had the art assets for dogs and cats for a while and we just forgot to use them. By the time one of the last towns, Cosette, was being developed, a dog on a farm just felt right. And that's when we remembered we had dogs and cats. But by that time, the placement for most NPCs was already done, and to retroactively go back and remove NPCs to create space for dogs and change character text to reflect their pet animals was not a priority. But a sleeping cat graphic is different - you can easily tuck a sleeping cat anywhere and it's not as big a deal. After that, the lore text reflected the path we had set upon, so we acknowledged in the game's lore that dogs were a rarity.

Ochoko Statues of Zophiel are seen worldwide, but how do the inhabitants of Phoenotopia feel about them? (It seems it is merged into a part of their lives…)

Quang Some people still pay respects to the Zophiel statue, but most people just ignore them - kinda like in real life! There must be tons of statues that we pass through in our day to day that we don't pay any mind to.

Ochoko When I restart the game from a savepoint near Zophiel’s statue, the heart meter is fully restored, isn’t it? Is there a special effect or something related to the statue?

Quang The Statue does have a healing power. However, people will feel its beneficial effects to varying degrees. Some people don't feel anything at all. Gail, being what she is, feels it more than most people.

Ochoko Is there a particular reason the Peace Ministers enforced regulation on telegrams and toasters?

Quang That was written mainly as a joke. The Peace Ministers want to reduce disruptive technology, but sometimes they go too far and regulate something that's harmless like a toaster.

Ochoko Bart is a Stellanite of royalty and is protecting Earthlings against his father, so do the Stellanites as a race, or the whole planet is inactive to protect Earth?

Quang Bart is a Stellanite royalty, but he's not protecting Earthlings from his father. His father is a king of the Stellanites in the Galactic Federation, and they want to stay uninvolved. The one Bart is helping Earthlings to resist is the incoming Astral Empire.

As for Stellanites as a race, they're conflicted about whether or not they can get involved. Some feel it's not their problem and that this could cause a war, and others think they should make a stand and fight. The setup is that there is a lot of political intrigue and it's a messy situation - hence why Bart has to act in secret.

Quang I want to keep Panselo's vibe as a very carefree and idyllic farming village, so there are no ruins below. There are ruins nearby (like Anuri Temple), but nothing below.

Quang  The legend of the Phoenix does differ in other countries! How they differ is to be decided, haha. I don't have to figure out the exact details unless the game or story requires I do, so I can't tell you how they differ yet. Maybe in a sequel game those topics will be discussed.

Ochoko  In Terrelum, there is a stone statue of Grasso, who is depicted as a young man. He visited Terrelum after taking care of his students, so he must be pretty old now. Why does his statue depict him as young?

Quang Grasso does look old - I think because he's a statue, we didn't successfully capture that he had gray hairs. It was a limitation of our pixel art style. Grasso also does have an extraordinarily long life - he outlived his students so there's also something special about him.

Ochoko Was the merfolk race you met at a particular place some kind of living bioweapons?

Quang In the Phoenotopia universe, all the fantasy races are a result of science or they're aliens from another planet. So for the merfolk, they were created in a laboratory - but not necessarily to be weapons. It's possible the humans would have created some races for other purposes such as art or for intellectual curiosity.

Ochoko  Who was the person that took Gail and the Phoenix from E.D.E.N. 16 years ago?

Quang  Ava and her expedition of explorers.

Ochoko What happened to Ava, who took Gail and Kitt to Nana? Also, I would like to hear if there were any episodes related to Ava.

Quang Ava went into hiding. If there's ever a sequel, I'd like to create a big moment for when Gail can finally meet her mom. But until then, Ava must remain in hiding.

Ochoko What do you think or feel about the moment Gail learns about her true self/origins? She uses her strength to save everyone, but are there still any conflicts in the end?

Quang I think Gail took that discovery in stride - maybe she subconsciously already knew she was different from regular humans. Gail is a silent protagonist, so the player can decide what Gail must have felt as she went through the events that she did. I did leave some trails for a sequel - for example, I think it would be natural for Gail to feel conflicted about staying to protect her village or venturing out to find the lost villagers. Hopefully, this subject can be explored in more detail some day.

Ochoko Very happy to hear so many exciting stories. Thank you so much for taking the time to answer my questions！

This concludes the Phoenotopia Long Interview compilation！We hope you enjoyed it as much as we did!！