Today, we would like to present part #6 of an in-depth interview with

Quang, the original creator of “Phoenotopia.” The interviewer is

Ochoko, "Phoenotopia Strategy Memo. ( フェノトピア攻略メモ。)" blogger who is also considered to be a representative of the Japanese Phoenotopia fans.

This next question relates to a big spoiler

Are the guitars in Gail’s room the same ones from where you learned the last songs?

I was captivated by the guitars appearing at the story's beginning and end.

When comparing them, it seems the guitars have different colors.

The hidden episode wherein you learn the last song reminds me of some part of MOTHER 2. Is that one of your other influences? Also, the protagonist's main weapon is a bat (Haha). 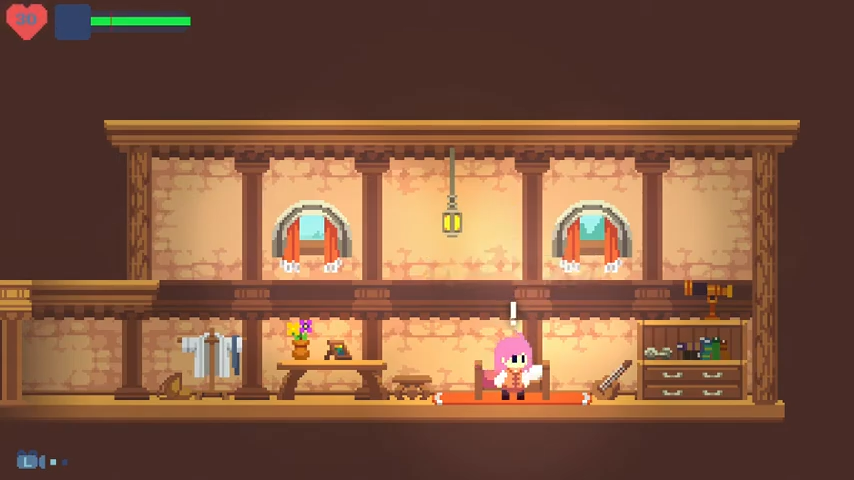 And yes, MOTHER 2 is a big influence too, haha! I love that game! I wanted to name Gail's brother "Klaus" as a tribute to Claus from Mother 3. But the artist said that the name "Claus" has a strong association with "old man." So we went with "Kitt" instead.

Ochoko  Also, I may be wrong about this, but one of my favorite things about Phoenotopia is that “as the game progresses, no one in the game dies from Gail’s perspective (no deaths are depicted)”, so was that the intentional direction for the game?

Quang Yes, that was intentional. I think if people die the world takes on more gravitas and becomes more serious (unless you're going for "dark humor" but that wasn't what I wanted). I thought of it like early One Piece. When Luffy beats up a bad guy, the bad guy goes quietly and agrees to not cause trouble anymore, haha. I wanted Phoenotopia to be a happy place that players would want to visit and return to.

Ochoko  But there is one occasion when the characters appear to be dead, and everyone is tricked or deceived at that point. When a major character is popular, it seems like a big shock...

So later on, when they find out that the character is alive, they are relieved and think, "Thank God they’re not dead..." or "Argh! It’s a trick!” (Haha)

There are also some dialogues that you can only hear in certain places, although they are not related to the story's progression.

For example, “The event that occurs after the moonstones has been delivered” and “the dialogue you hear when you blow the whistle at a particular location, etc..."

You don’t receive anything in particular, but I like events wherein I can listen to a backstory.

As a matter of fact, is there a factor to a hidden event that no one has discovered yet?

For example, does the development staff appear somewhere…? (Haha)

I'm glad you liked those! And no, the development staff does not appear in the game. Towards the end of development, we were all too tired and didn't want to go through the work of adding anything extra, haha.

I think all the game's secrets have been discovered. Since the game's made in Unity I think it's easy to decompile. Fans have emailed me about stuff that I didn't even know. For instance, a fan taught me that there's a hidden cat picture in one of the game's opening cutscenes that we forgot to clean up (it's hidden due to the layering).

I have no idea how you would hide a secret completely. Haha, I'm going to research that for my future games.

Ochoko I would now like to ask you about RTA (known as Real Time Attack in Japan, a speedrun event) challenges...