It's KOU from Flyhigh Works.

We talked and asked Transiruby creator KIMURA of SKIPMORE various questions to commemorate the release.

This is a two-part interview. The first part will be presented by me, Kou as the interviewer, and the second part will focus on questions by the Flyhigh Works staff.

Please feel free to check them out if you're interested.

KOU  During 04/2022, later this month, the Nintendo Switch version of「Transiruby」is scheduled to be released. Thank you so much for the hard work!

KIMURA Thank you too for your hard work.

KOU First off, how do you now feel looking back on the development period?

KIMURA At the beginning of the project, it was planned to be completed within 2 years, but it actually took twice as long. This was my first time creating a side-view game, so I misjudged the perspective of the complete workload. I did not expect to work for 2 years on only level design...

KOU  I see. That's precisely what is called "birth pains." By the way, I think you were able to create「KAMIKO」 as a top-view game in a short period, but what were some of the difficulties in making「Transiruby」a side-view game?

KIMURA 『KAMIKO』's map took about 3 months to complete. However, 、『Transiruby』's map is about 10 times larger than『KAMIKO』, so even if it were developed at the same speed as 『KAMIKO』, it would still take about 2 and half years to complete...now that I think about it,『Transiruby』's map was relatively good? When I calculated the workload, I thought I could make the side-view map faster than the top-view map because there was an insufficient layout of the area. 1 area took about 4 months to complete in that sense. However, there is a sense of "gravity" while creating a side-view game. I thought the tools and maps are「perfect！」, but when I actually played it, there were places that I wanted to jump and reach to, and on the other hand, there were places that I did not want to jump to reach, so it took a considerably good amount of time to create the game after making adjustments.

KOU  Ah, I see. By the way, ESQUADRA, Inc (@studioesquadra) was also part of the development team, so how was it like working together?

KIMURA I felt secure trusting ESQUADRA, Inc. Their accumulation of technical skills and experience is reassuring.  Also, QA, etc., is essential, so I am grateful for their support. 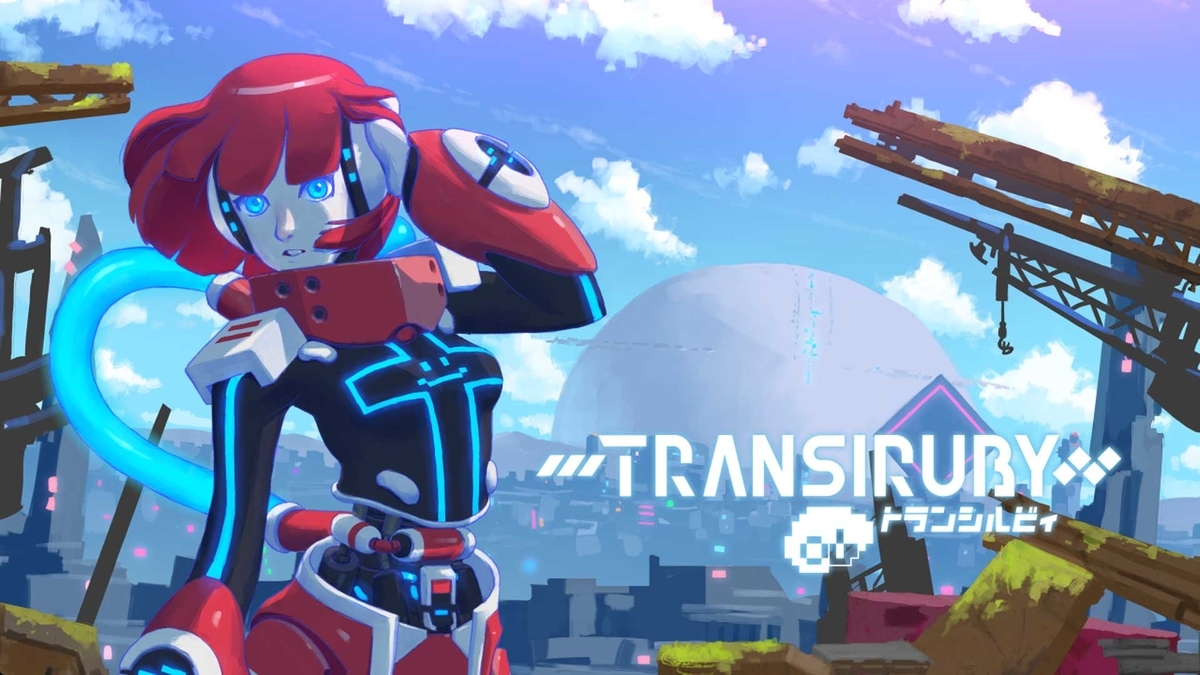 KOU   By the way, the primary visual was drawn by Kato Oswald(@ozoztv) san, who also worked onFairune Collection.

KIMURA I like how Oswald san drew skies and clouds, so at any chance I get, I requested their help ever since『Fairune Collection』. Along with the title screen, Oswald san helped with the ending illustration.

KIMURA I have known Misoka san since I created Garakei smartphone games. みMisoka san's forte is using FM sound generators rather than Famicom and Super Famicom sound generators, so in this case, just like with『KAMIKO』, they said「This is what FM Synthesis should sound like！」, so I sent in excessive requests and listened to them (Haha).

KOU By the way, I want to talk about the game. I really like the scene at the beginning of the game in which Siruby plunges into the atmosphere and then embarks on a new adventure (Please refer to the video below). This "grip" is the simplest and most incredible thing, and I felt like, "This is what SKIPMORE is made of."

KIMURA Thank you very much. The scene in which Siruby plunges into the atmosphere was inspired by '90s anime. Around that time, Sci-Fi anime had plunged into atmosphere scenes.  There may be some people from the same generation as me that are like, "Yeah, Yeah, this is it!" so I thought it would be neat to produce something like that.

KOU I also like how each area has its own unique monument and superb scenic viewpoint. Now I feel that I'm speaking from a personal fan's point of view. 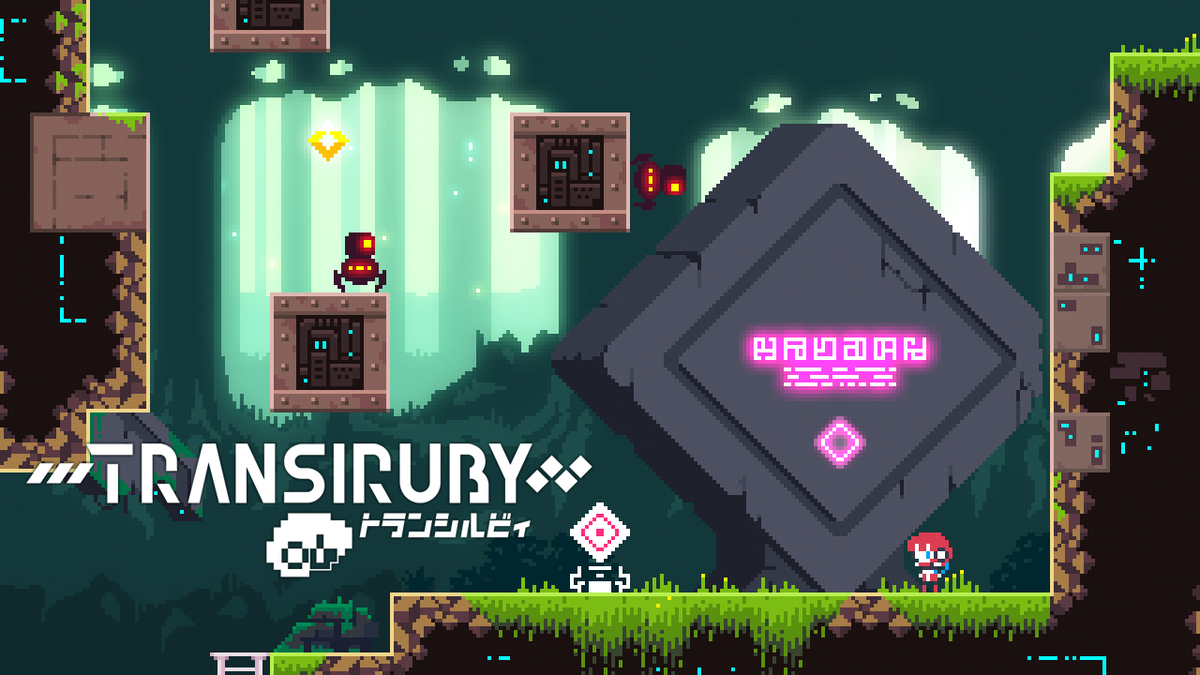 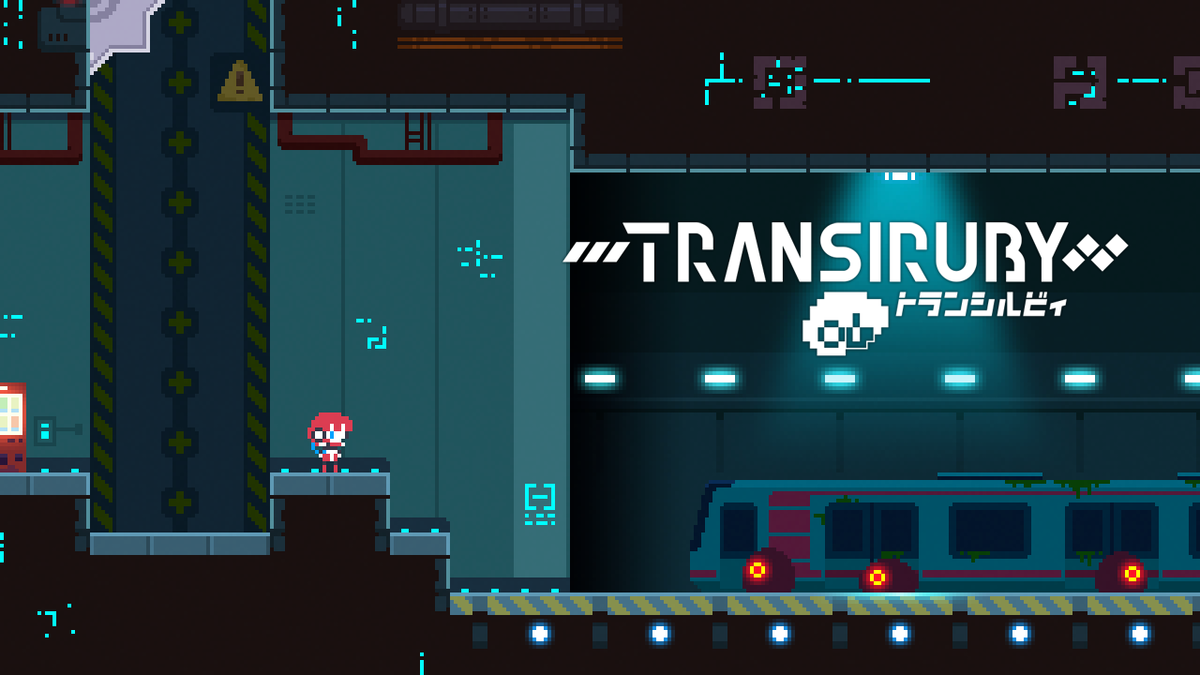 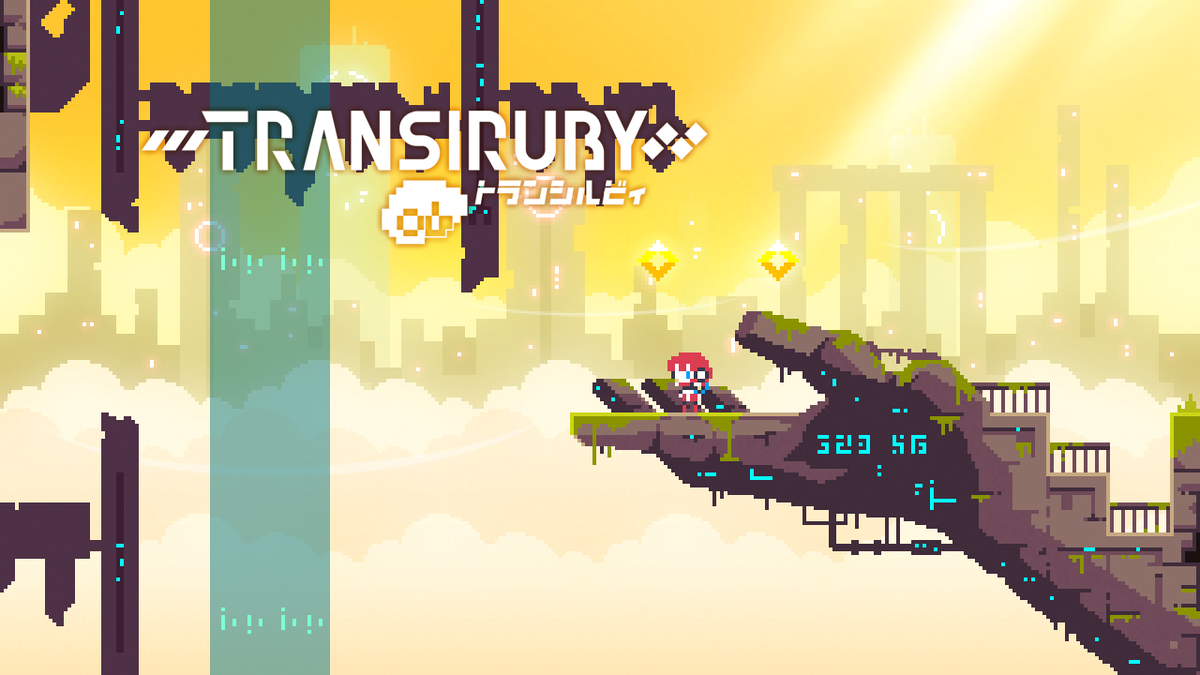 KIMURA They are all significant objects (Haha).  While I'm creating games, I do not have time to draw pixel art as a hobby, so I put my hobby pixel artworks in-game and took the opportunity to add some flavor to them.

KOU Furthermore, this is from an enthusiastic point of view, but when the protagonist, Siruby, transforms into an aircraft for the first time, the BGM, or should I rather say "Feel the Sunshine," is flowing. Before that, the atmosphere felt oppressive. Until that point, it felt like everything was cleared up like the sun, so I personally liked that part too. There were also moments like that presented in「Fairune 2」and「KAMIKO」.

KIMURA The map was created by trying to make spacious airspace, narrow pathways, and alternating the tempo, which was a significant alteration added to the production included with a scene. For the scene in which the aircraft enters flight mode for the first time, the BGM was composed first, and then the direction of the stage's graphics was created to complement it. I do not know if Areas 1 - 3 were great pretenses for displaying this sense (Haha).

KOU I apologize for accidentally taking the direction of discussing various personal fan-oriented topics. Thank you so much! For the next part, we will discuss questions from the staff.

KIMURA Thank you very much.

And that concludes the first half of the Transiruby #5 Developer Interview Vol. 1. What do you think of it?

Transiruby is now available on STEAM and available for pre-orders in the eShop!