It's KOU from Flyhigh Works (FHW). 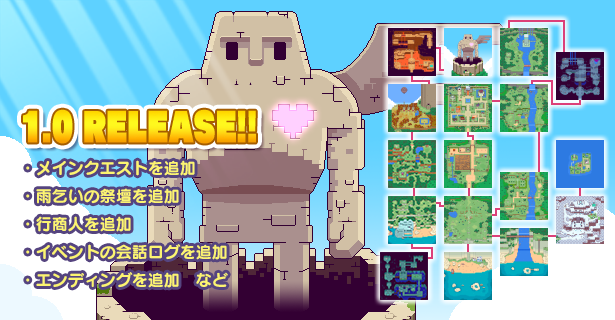 Recently, we implemented the final update, and slow life RPG「Picontier」 is finally "completed."

This time we spoke with Picontier creator KIMURA san about various things regarding the project.

This is a two-part interview. The first part will be presented by me, Kou as the interviewer, and the second part will focus on questions by the Flyhigh Works staff.

Please feel free to check them out if you're interested.

KOU First of all, thank you for working so hard on the Final Update. This feels like Picontier's story has reached its end. It's been about 5 and half years since Picontier was first announced, so how do you feel about the project now that it's been completed?

KIMURA Thank you for your hard work and support too! In the beginning, there were no plans for the announcement, but after I told Flyhigh Works that I was planning to make a slow life-styled game, they said, "Let's announce it!" So, I spent two weeks working on the title, plot, character designs, and a teaser trailer, which is a good memory nowadays. But I had no idea it would take so long to develop it...

I am working on various things in the Switch version right now 〜 So I'll probably feel like the project is completely finished once that is finished.

（※Check out the original PV below.）
（※Please note that the information regarding platforms, etc., was relevant at that time.）

KIMURA Honestly, the main quest and scenario were completed in 2018, so there have been barely any changes. Everything has been going according to plan as far as the main story is concerned.

KOU Is there a best character and event you have created？

KIMURA   It's Aila. In Fairune and Transiruby, some companions/partners guide the protagonist, but Aila is the first character I ever wrote who talks on and on.

KIMURA I also like Chemical Phantom. I like the events related to Aila, particularly the UFO events, which were fun to make because they completely expose my preference.

In contrast, is there a character and event that you struggled the most with creating?

KIMURA There were no issues in designing the characters and setting. However, there were some regarding the everyday conversations between the residents. Each resident has about 150 lines of dialogue. For example, a resident talks about trivia on "tomatoes, " so I first had to search the internet about the trivia on "tomatoes" and then check to see if they were true. Even though it's just in a game, it's terrible to have a character that shares wrong information. That's why it took me a long time to verify the information, then spend 1 hour writing one line of dialogue. After that, I spent about a month checking each characters' dialogue for typos, consolidating their tones, or seeing if there were any significant inconsistencies. So half of the development period was spent preparing the characters' dialogues and making adjustments.

KOU Alia is a supporting character to the protagonist in Picontier, and they appear in Transiruby. Is there a connection between these two worlds?

KIMURA All the SKIPMORE games occur in the same universe at different periods, so honestly speaking, since I am the only one who works on the story, my stance is to reuse what I can use. It's tough to create a complex character from nothing, so when I create a good character, I reuse them. (haha).

KOU FHW has been co-operating with SKIPMORE for almost 10 years now. You have spent 10 years working on games with various genres, including Fairune (3DS) and Fairune 2. Drancia Saga, KAMIKO, etc. Do you think there have been "environmental changes" after 10 years of creating console games for consumers? Or, in contrast, "things have not changed"?

KIMURA Ten years, the time has gone by so fast! When I first met with Flyhigh Works, I was told something like "We're not suspicious" or something like that, which left an impression (haha). At the time, Flyhigh Works worked porting Fairune and Drancia to 3DS while I was working on Fairune 2 by myself. After that, game engines like Unity, etc., made it easier for individuals to develop games. Nowadays, multi-platform is the goal, so I think it is challenging to debug and supply equipment for individuals. For Transiruby, the QA team at Esquadra, inc.（※The development company in charge of programing Transiruby) helped a lot. What's constant...it's still possible to make a game popularly used worldwide using pixel art.

KOU Can you give readers a slight hint about your next title?

KIMURA The next project will be the next installment of a puzzle-solving action RPG series that starts with an "F"! Right now, I am collecting the specifications as I construct the map. Please look forward to it!

That's it for now!

What do you think about the interview questions that we asked KIMURA san?